Introducing a new world of audibility; getting the hang of using a stethoscope for heart auscultation 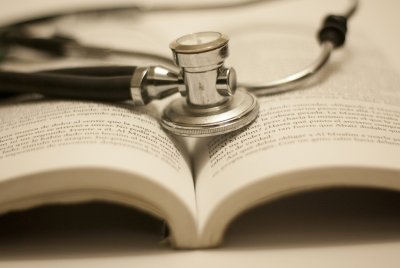 Stethoscopes have been used in medical fields (and non-medical fields) for over 200 years, having been invented in France in the early 19th century. Early stethoscopes consisted of a single wooden tube but by the middle of that century, a binaural (using both ears) version had been designed. Since then stethoscopes have gone through several re-designs, resulting in the modern efficient devices used in practice today.

Identifying the right stethoscope for you can initially be daunting – there is so much choice! Ultimately, a basic model which has both a bell and diaphragm region to the head piece is more than adequate for standard clinical examination. If you plan on working with particularly small animals there are stethoscopes (paediatric and neonatal) which have a smaller head piece enabling finer localisation of sounds you may hear. If you plan of moving into more advanced fields where auscultation becomes more relevant (such as Cardiology) there are more advanced stethoscopes which have improved audibility specifically for these fields. There are now also digital stethoscopes, allowing recording of heart sounds (and playback) and also assisting people with hearing difficulties.

Getting the hang of using a stethoscope in the first instance can be tricky. Believe it or not, there is a ‘right’ and a ‘wrong’ way of putting it in your ears! Most importantly it should feel comfortable when you put it in your ears. And don’t be tempted to tap the head of the stethoscope to see if it is working! If it is working it will be very loud for you or whoever is listening in.

Using your stethoscope on a patient may seem a long way away at this stage but before long you will be doing it without thinking about it. Before using it on animals (which have fur, pant, can be barrel chested and can be non-compliant about standing still) it is worth having a practice on yourself (and some friends/family if they are willing). Your heart sits in the upper left half of your chest, underneath the pectoral region. Placing your stethoscope over this area should enable you to identify the heart beating away – you should hear a classic lub-dup sounds (which equates to two sets of heart valves snapping shut during the normal heart cycle). If you move your stethoscope around you may find one of the heart sounds gets louder/quieter as you move closer or further away from the valves responsible. You should also hear your normal breathing sounds in the background (assuming you aren’t holding your breath as you concentrate) which should sound like a gentle white noise. 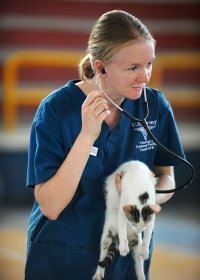 Once you have gotten used to hearing heart sounds it is time to practice on a willing animal. The ideal patient is one that will stand still, stay calm, not pant and is nice and slim (so for a dog a calm Greyhound for example or a horse standing still). Animals generally have slim upright chests compared to humans so to hear heart sounds you will need to listen on both the left and right side of the chest. To identify where to start place your hands on the left side of the chest just behind the elbows and you should be able to feel the heart beating under your hands (this is known as the ‘apex beat’). This is where to put your stethoscope and you should again hear the lub-dup of the heart sounds. From this position you can move forwards (towards the dogs armpit) and keep listening; the sounds may change subtly in audibility. Repeat this process on the right side of the chest.

Once you can hear the heart the next step is to count the heart rate. To do this you can count the number of heart beats (lub-dup=1) over 15 seconds and then multiply this by four and this will give you the heart rate (per minute). You should also think about the heart rhythm; is it regular (could I play a tune to it) or is it irregular. Finally, you may hear some sounds additional to the usual lub-dup, such as murmurs. These may be harsh, whooshing white noise sounds and can indicate there is heart disease.

So at this stage – congratulations of getting your new stethoscope. Enjoy using it and practising hearing heart sounds. They are the beginning of  a fascinating world of clinical exploration. And remember, the more you practice the better you will get (even with those tricky to hear hearts!).